A Social Network of Love: The Rader's

Peachtree Events was given the wonderful opportunity of coordinating the wedding of Chad and Gabrielle Rader on Saturday, August 20, 2011.  The ceremony and reception took place at the Mansion at Oak Hill in beautiful Carmel, Indianapolis.  The Rader’s took advantage of our "Ripe" package, which normally takes place a month prior to the couple’s wedding date.  The Ripe package includes, but is not limited to:
Let's take a look into the story of Chad and Gabrielle.
THE BEGINNING......
Whoever said that social networking was bad for relationships, you haven't heard the love story of Gabrielle Flowers and Chad Rader.  The couple first met when Chad was browsing around his newly created Facebook profile and came across Gabrielle's profile.  Gabrielle's profile peeked his interest, but being the laid back person that he is, he didn't want to go full speed ahead. Instead of a full-fledged message, he decided to just comment on one her pictures.  Little did either of them know that this simply exchange would be the beginning of a beautiful romance....

THE ENGAGEMENT.......
Distance does make the heart grow fonder and boy did it EVER in the case of Chad and Gabrielle.  With the looming of multiple deployments by Chad and Gabrielle in the states yearning for Chad's return, it made for a very hard journey as time passed along. While social networking came to the rescue in the form of Skype, it wasn't enough for the two love birds.  Chad decided that he would go for the gusto and propose to Gabrielle, but after much thought, they decided not to go forward with the engagement due to Chad's upcoming deployment.


﻿﻿﻿﻿﻿
﻿﻿﻿
Time continued to pass and the love between the two grew stronger than ever.  A New Year's Trip to Vegas proved to be just the push the two needed to become one. After many heart-to-heart talks between the both, Chad decided to ask for Gabrielle's hand in marriage again and to his surprise, she accepted!!
﻿

THE WEDDING.......
The day was finally here!  Chad and Gabrielle were becoming one and Peachtree Events was there to make sure the day went smoothly.  The soon-to-be Rader's decided on an outside, courtyard ceremony for all their guests to enjoy.  Gabrielle was escorted down the aisle by her step-father in a gorgeous, white, strapless ball gown with crystalized bodice and feather accented tulle.  Her hair was flawlessly swooped to the side in an elegant ponytail with a beautiful, feathered fascinator and crystal teardrop earrings to make the bride just glow as she walked down to meet her love.  Gabrielle carried a beautiful bouquet of white and pink roses to make her look complete!


Chad donned a nice, crisp black tuxedo with white and purple accents to compliment the look.  This ceremony was filled with so much love for Chad and Gabrielle from the poem read by the mother of the bride to the unity sands poured, which included a special dedication from Gabrielle to her groom Chad!  After a short prayer, the bride and groom were presented....Mr. and Mrs. Chad Rader!!

THE RECEPTION.......
The love story continues with the new bride and groom being introduced for the first time and Mr. and Mrs.  During the reception, the love signed, sealed and delivered when the song "God Kept Me for You" was played, which was recorded by Gabrielle.  What a beautiful display of love and affection.  The night kicked into gear as the bride and groom took to the dance floor and danced the night away with their family and friends. 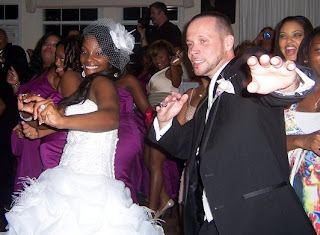 The Rader's were truly a blessing to work with and we at Peachtree Events had a wonderful time sharing this day with them!  Thank you for trusting Peachtree Events enough to be a part of your day!!
Check us out on www.peachtreeevents.com.  We would love to help you plan your next event!!
Posted by Peachtree Events at 4:29 PM